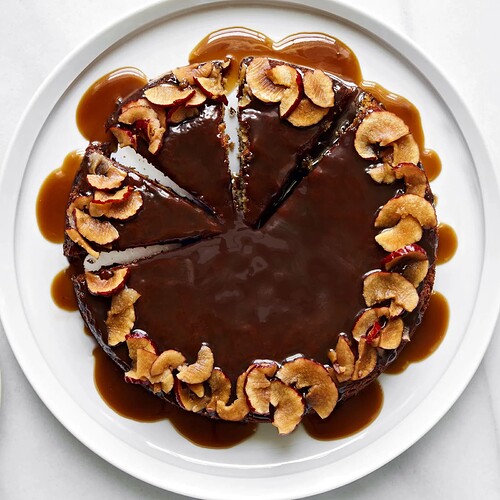 Cake:
Preheat oven to 350°F. Butter pan; set aside. Bring dates, baking soda, and ¾ cup water to a boil in a small saucepan, stirring constantly. Reduce heat and simmer, stirring occasionally, until water is almost completely evaporated, about 3 minutes. Let cool.
Sift flour into a medium bowl; mix in baking powder and salt. Using an electric mixer on medium-high speed, beat granulated sugar, vanilla, and remaining 6 Tbsp. butter in a large bowl until light and fluffy, about 3 minutes. Add eggs one at a time, beating to blend after each addition; beat until mixture is very light and airy, about 3 minutes. Reduce mixer speed to low; add half of dry ingredients and beat just until incorporated. Mix in cooled date mixture, then add remaining dry ingredients and beat until just combined. Scrape batter into prepared pan and smooth surface to make an even layer.
Bake cake until a tester inserted into the center comes out clean, 25–30 minutes.
Glaze and assembly:
While the cake bakes, make the glaze. Slice each date in half lengthwise, then thinly slice each half into strips. Place in a small bowl and pour in ½ cup boiling water to cover; let soak.
Cook cream, butter, brown sugar, and salt in a small saucepan over low heat, stirring occasionally and breaking up sugar as needed, until butter is melted, about 5 minutes. Bring just to a simmer and cook, stirring, until glaze thickens slightly, about 5 minutes. Let cool until glaze thickens further but is still pourable, about 15 minutes.
Remove cake from springform pan and slide onto a platter or large plate. Arrange drained date strips along edge of cake so they look like spokes on a wheel. Carefully drizzle warm glaze over cake, so it drips over the edges. Let cool completely before serving.