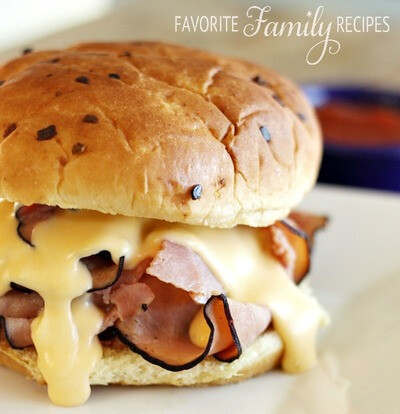 In a medium-sized skillet over medium heat, cook deli ham until heated through (spray the pan with cooking spray to reduce sticking).
Spread Arby’s sauce on one side of each bun and place ham on the bun.
Spoon on cheddar cheese sauce (see below) and serve.
For the cheese sauce:
Melt butter in a small sauce pan over medium heat. Whisk in the flour (whisking constantly) and cook for about 1 minute forming a roux.
SLOWLY whisk in milk until reaching desired consistency.
Remove from heat and stir in cheese.
Add salt & pepper, to taste.

Mixture will be similar in thickness to steak sauce. Store in a covered container in the refrigerator. This sauce is a nice change on hamburgers or pastrami, and great dipping sauce for hot wings.

I’ve never had Arby’s ham & cheddar, I always go with the roast beef. Sounds like a really tasty recipe though. I like that you included the Arby’s Sauce recipe too, I really like. Beside having that on my sandwich, I like to dip curly fries in it.

Excellent recipe! Just one quick observation - you list corn starch and then water as two ingredients for the sauce, but in the directions you don’t explain that these two have to be well-stirred together before being added. You simply say to put all sauce ingredients into a blender and mix, and then after simmering for twenty minutes, you say to add the corn starch mixture, a mixture that isn’t explained or described.

A lot of people don’t read recipes all the way through before starting, and there are others out there who also don’t know about using a corn starch/water mixture to thicken sauces. What will happen is that some of your readers will throw the corn starch and water into the blender with the rest of the sauce ingredients. Then there will be those who say, “What corn starch mixture? That wasn’t mentioned!” So maybe you could add “except the corn starch and water” right after “Place all ingredients…” Then, after the direction to simmer this, add that they should add the 2 tablespoons of water to the 1 tablespoon of cornstarch and stir until completely blended. Now they have a corn starch mixture that can be added to the simmered sauce ingredients and they won’t be confused.

Love this, by the way - always wondered what went into that special sauce of theirs! I figured out the ketchup and vinegar, but wasn’t sure about the rest. Thanks for sharing this - gonna make it for lunch tomorrow! ')

You missed a key word in Place all sauce ingredients in a blender. The corn starch and water are not listed as sauce ingredients but as part of the Corn Starch Mixture (thickening mixture). I put a blank line there to make that clear. Thanks for pointing out that it may not be clear to some folks.

Thanks for this. After reading it twice, I caught the Corn Starch Mixture. However, it does not have a blank line separating it from the other part. I’m so glad I caught it because I am known by my family as missing steps! Can’t wait to try this. Love Arby sauce so double the pleasure!