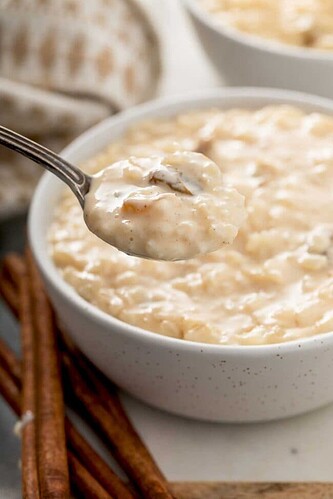 Place the water, rice, cinnamon and cloves in a saucepan. Bring to a boil over medium heat and cook uncovered, stirring occasionally until the rice becomes tender, about 18 minutes.
Using a fine mesh strainer, strain the liquid and discard the cinnamon stick and cloves. Return the rice to the pot and stir in the evaporated milk, condensed milk and whole milk.
Bring the mixture to a boil over medium-high heat then, reduce the heat to low and cook, stirring constantly for about 20 minutes or until the mixture thickens. It’s important to stir making sure the rice is not sticking to the bottom of the pot. The sweetened mixture can burn very quickly.
Remove from the heat and stir in the vanilla extract and raisins. Pour mixture into a bowl or into individual portioned serving cups or bowls. Dust with ground cinnamon to taste.