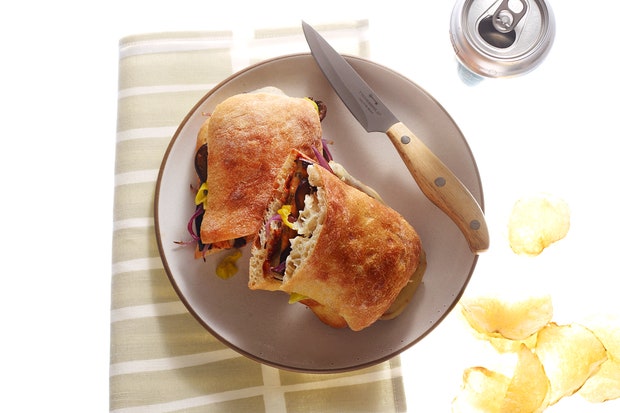 Position oven rack six inches from the heat source and preheat broiler on high. Line broiler pan or rimmed baking sheet with foil.
Brush eggplant slices on both sides with 2 tablespoons BBQ sauce and season with 1/2 teaspoon salt and 1/4 teaspoon peeper. Arrange slices on foil-lined pan.
Broil eggplant until browned and soft, about 4 minutes. Meanwhile, in a medium bowl, toss mushrooms and red onion with oil, 1/2 teaspoon salt, and 1/4 teaspoon pepper and reserve.
Remove broiler pan from oven, flip eggplant slices, and brush with 2 more tablespoons BBQ sauce. Scatter mushroom mixture around the eggplant on the pan and broil until browned and soft, about 3 minutes more. Add 1 slice of cheese to each eggplant plank and continue to broil until cheese is melted and browned, about 2 minutes more.
To assemble the sandwiches, brush the top toasted half of each roll with 1 tablespoon mayonnaise and each bottom half with 1 tablespoon BBQ sauce. Layer an eggplant slice, some mushroom mixture, and a few slices of pepperoncini on the bottom of each roll. Close the sandwiches and serve immediately.