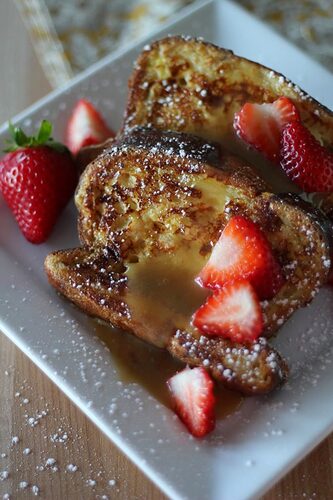 Beat eggs, egg yolk, half and half, vanilla and sugar together in a 9x13 pan.
Place the bread in the pan and let the bread soak up the egg on one side for about 5 minutes, then turn and let soak on other side. If the bread does not fit all at once in the pan, let the bread soak, then remove to plate to allow other pieces to fit in pan. Let any excess egg mixture drip off into pan.
Heat frying pan or griddle up to 350 degrees. Melt a small amount of butter in pan. Place french toast pieces in pan and fry until golden on first side. While cooking the first side, sprinkle a small amount of sugar on the uncooked side. Flip and cook other side until golden and sugar is caramelized.
Serve with Maple Cream Syrup.
Syrup: Place cream, butter and brown sugar in a pan over medium heat. Bring to a boil. Cook for one minute. Remove from heat and add maple extract, dash of salt and vanilla.

Notes
-The cooking time will vary according to the pan/heat source you are using. I use a built in griddle, which gets hotter than the typical griddle (plug in type). I’ve also used a Teflon pan over a flame. I believe the best crust is formed on the french toast when using a cast iron or other non Teflon type coated pan. This allows the sugar to form a bit of a caramelized layer on the outside of the french toast. That said, this recipe tastes delicious when using an electric griddle with a Teflon coating. If you are cooking several batches you may need to wipe out the pan to prevent the bread from sticking to the melted sugar. Remember to butter the pan after each batch.
-Remember the bread is thick, and time needs to be allowed to cook the inside of the french toast as well as the outside of the bread. Don’t turn the heat up too high, or the outside will burn and you’ll be left with a soggy inside. We’re looking for tender and creamy, not soggy.
-You can find Brioche in many specialty bakeries. I have also used a Challah loaf.
-Store any leftover syrup in refrigerator, covered. It will keep for a month or so. Just heat up when ready to use.

Thank you. Sounds delicious! Will have to make some brioche.