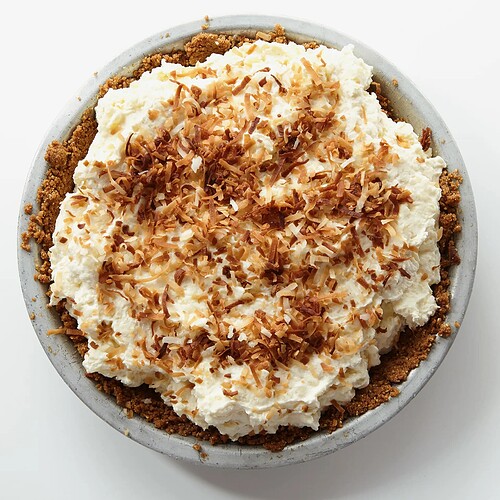 Make the crust:
Preheat oven to 350°F. Pulse sesame sticks and granulated sugar in a food processor until finely ground. Add butter and continue to pulse until dough sticks together when pressed with your fingertips.
Transfer to pie pan and press evenly into bottom and up sides with a flat measuring cup. Chill in the freezer until firm, about 15 minutes. Bake crust until golden brown and set, 12–15 minutes. If the crust has slouched while baking, use measuring cup to fix. Let cool.
Make the pudding:
Mix gelatin into 1/4 cup warm water in a small bowl; set aside to bloom.
Heat coconut milk, cream, and 1/2 cup granulated sugar in a large heavy saucepan over medium-high until simmering, about 4 minutes, then reduce heat to medium-low.
Whisk cornstarch, salt, and remaining 1/2 cup granulated sugar in a medium bowl. Add eggs and continue to whisk until well combined. Whisking constantly, slowly pour half of milk mixture into egg mixture to temper. Pour egg mixture back into pan, stir in rice, and bring to a boil over medium heat, stirring constantly and scraping bottom and sides of pan until thick and big bubbles are rising to the surface, about 4 minutes. Remove from heat and stir in gelatin until dissolved, then transfer to a large bowl or resealable container. Let cool slightly. Place plastic wrap directly on surface of pudding to prevent a crust from forming and chill at least 2 hours and preferably overnight.
Make the caramel:
Bring coconut milk and brown sugar to a boil in a medium saucepan over medium heat, whisking to combine. Reduce heat to medium-low and cook, stirring often with a rubber spatula, until reduced to a thick, glossy sauce, 10–15 minutes.
Remove from heat and whisk in butter and salt. Pour caramel into cooled crust and tilt to coat bottom of crust. Freeze until set, about 15 minutes.
Make the rum whip and assemble the pie:
Beat cream in a stand mixer fitted with the whisk attachment until soft peaks form, 3–4 minutes. Add rum, powdered sugar, and salt and continue to beat until stiff peaks form. Chill two-thirds (about 3 cups) of the whipped cream until ready to use. Fold remaining cream into chilled rice pudding.
Fill pie shell with pudding. Chill at least 2 hours and up to overnight. When ready to serve, re-whip rum cream until it holds stiff peaks and pile on top of rice pudding. Sprinkle with toasted coconut and slice to serve.