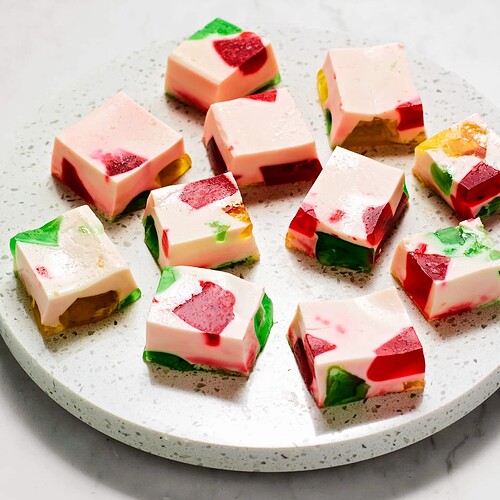 Lightly coat three 8-inch square pans and one 9 × 13-inch baking pan with cooking spray.
In three separate bowls, mix each package of flavored gelatin with 2 cups boiling water. Pour each into its own greased square pan. Refrigerate for 1 hour.
After the jellos have been in the fridge for 30 minutes, make the milk gelatin. In a 3-quart saucepan, mix the gelatin into 1 cup water. Set aside for about 5 minutes so the gelatin can bloom. Set the saucepan over medium-low heat and stir occasionally until the gelatin has dissolved. Add the whole milk and heat to just under a simmer. Add the cinnamon stick, remove from the heat, and let the mixture steep for 30 minutes.
Remove the cinnamon stick and whisk in the condensed milk, half-and- half, and vanilla extract. Set aside while you prep the colored gelatins.
Remove the colored gelatins from the refrigerator and cut each flavor into 1-inch cubes. Evenly spread out and mix each flavor in the 9 × 13-inch pan. Pour the milk jello over the cubes.
Refrigerate until set and firm, 2 to 3 hours.
When you’re ready to serve, invert the gelatina onto a cutting board, cut into 3- to 4-inch cubes, and place on a serving platter.