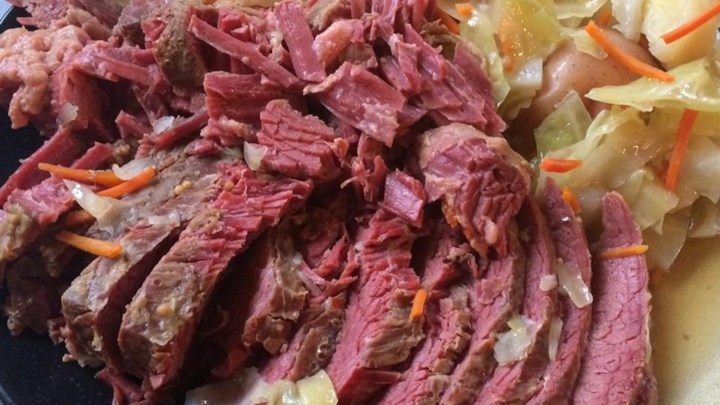 If you don’t have access to prepared corned beef, as is the case here in Thailand, you can do it yourself using this recipe. I actually find it to be better than what I used to get when I was in the US.

You can either used store-bought pickling spices or you can make your own. To make your own, toast the allspice berries, mustard seeds, coriander seeds, red pepper flakes, cloves, peppercorns, and cardamom pods in a small frying pan on high heat until fragrant and you hear the mustard seeds start to pop.
Remove from heat and place in a small bowl. Use a mortar and pestle to crush the spices a little (or the back of a spoon or the side of a knife on a flat surface). Add to a small bowl and stir in the crumbled bay leaves and ground ginger.

Add about 3 Tbsp of the spice mix (reserve the rest for cooking the corned beef after it has cured), plus the half stick of cinnamon, to a gallon of water in a large pot, along with the Kosher salt, pink salt (if using), and brown sugar. Bring to a boil, then remove from heat and let cool to room temperature. Then refrigerate until well chilled.
Place the brisket in a large, flat container or pan, and cover with the brine. The brine should cover the meat. The meat may float in which case you may want to weigh it down with a plate.

Alternatively you can use a 2-gallon freezer bag (placed in a container so if it leaks it doesn’t leak all over your refrigerator), place the brisket in the freezer bag and about 2 quarts of brine, squeezing out the air from the bag before sealing. Place in the refrigerator and chill from 5-7 days. ( I actually brined mine for 16 days.) Every day flip the brisket over, so that all sides get brined equally.

At the end of the cure, remove the brisket from the brine and rinse off the brine with cold water. Place the brisket in a large pot that just fits around the brisket and cover with at least one inch of water. If you want your brisket less salty, add another inch of water to the pot. Add a tablespoon of the pickling spices to the pot. Bring to a boil, reduce to a very low simmer (barely bubbling), and cook 3-4 hours, until the corned beef is fork tender. (At this point you can store in the fridge for up to a week.)

Thanks, I will give this a try. I make my Canadian bacon because it is so expensive to buy, and it is better than store bought just as what you stated about homemade corned beef. The process for it is similar to the one for corned beef.

Your recipe for Canadian bacon would be appreciated.

To make the cure, combine 1 quart of water, Kosher salt, maple syrup, brown sugar, pink salt, bay leaves, garlic, and peppercorns in a medium saucepan. Bring to a boil over high heat, stirring to dissolve salts and sugar. Boil for 1 minute, then remove from heat. Transfer to a large container and stir in remaining 3 quarts of water. Place in refrigerator until completely chilled. Fully submerge pork loin in cure and let sit in refrigerator for 3 to 5 days. Remove pork from cure and place in large container. Add enough fresh water to fully submerge loin. Let sit for 30 minutes, then remove pork from water and pat dry with paper towels.
Fire up the smoker or grill to 175 degrees. The add smoking wood chips and place pork in and cook until a probe thermometer registers 120 degrees when inserted into thickest part of the pork loin, about 2 to 3 hours.
Let pork cool for 30 minutes. Slice and pan fry before before serving.

Note
If you let it stay in the frig for more than 5 days it becomes more salty, but I suspect some folks would like it that way.
You don’t have to smoke it but I like the smoke flavor. I cook some the day I smoke it and freeze the rest having 4-6 slices per bag.

Thank you. This sounds very good.

It is delicious, and I make it every time the boneless pork loin is on sale. You will want to keep some in your freezer to share with your friends.

I have the corned beef in the frig. I remember the last time I made Canadian Bacon I left it in the frig for 7 days, and we thought it was too salty. Prior to that I always took out after 5 days and it was just right. I read that you leave yours there for 16 days. It seems to me it would be way too salty even cooking with the extra water.

I use rock sea salt which is not nearly as salty as table salt. Perhaps this is why mine was not too salty. There were 12 of us for dinner and no one said it was too salty.

I would suspect you are correct. I used the Kosher salt and I tasted the brine and it is very very salty. I am going to try it at 5 days, and see how that works out. I may need to make some adjustment for the next time. I do know that if you have really salty Country Ham you can soak it in water to remove some of the salt, and make it palatable.