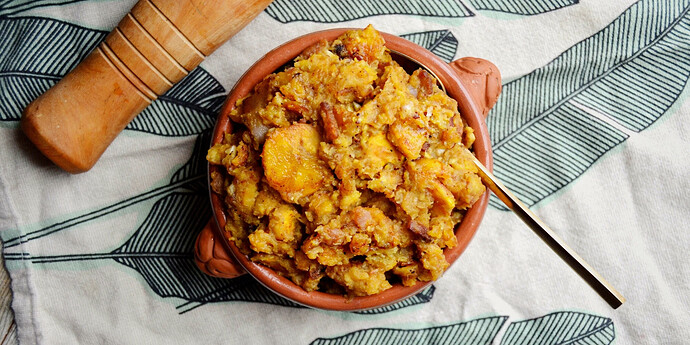 Mofongo — a Puerto Rican recipe of fried green plantains mashed with garlic, pork and seasonings — could easily claim the title of the island’s national dish. Mofongo is enjoyed throughout the year as a side for everything from sautéed shrimp to grilled steak, but for Thanksgiving, we add broth and a few other ingredients to turn it into a moist and savory stuffing that’s right at home next to the turkey. For Puerto Ricans both on and off the island, Thanksgiving has always brought together the best of both worlds by combining traditional mainland dishes like turkey and stuffing with local island flavors and ingredients, and this savory plantain stuffing is one of the tastiest examples of this cultural mix.

In a food processor, combine all the ingredients and process until smooth. Measure out 3/4 cup. (Leftovers can be refrigerated and used for other recipes — use as a marinade, in scrambled eggs or add to soups or pasta sauces.)

Fill a large heavy-bottom pot with 3 inches of vegetable oil. Heat oil over medium-high heat to 375°F.
While the oil heats, peel the plantains and slice on the bias into 3/4-inch thick slices.
Once the oil is hot, fry the plantain slices in batches for 3-5 minutes, or until golden brown. Use a slotted spoon to transfer to a large bowl, then repeat with rest of plantains and set aside.
Dice the slab bacon and cook over medium-high heat until crisp. Pour the crisp bacon pieces and any rendered fat into the bowl with the plantains.

Food processor method: In the base of a food processor, combine the plantains, bacon, pork rinds, 1 teaspoon of kosher salt, 1/2 teaspoon black pepper, 3/4 cups of sofrito and 1/3 cup of olive oil. Pulse until plantains are chopped and mixture resembles coarse crumbs. Add broth slowly, about 1/4 cup at a time, until stuffing starts to hold together — it should be moist, but not mushy, with a texture closer to bread stuffing than mashed potatoes. You may not need all the broth. Taste and adjust seasoning as needed with additional salt and pepper.

Mortar and pestle method: Working in batches, add a portion of the plantain and bacon mixture to a bowl or mortar and mash with a few tablespoons of the sofrito, olive oil and broth until ingredients are evenly combined. Transfer to a bowl and repeat with rest of mixture. Stir together, adding broth as needed until stuffing is moist and holds together, but not mushy. You may not need all the broth. Taste and adjust seasoning as needed with additional salt and pepper.

This can be stuffed inside a turkey, or it can be placed in a baking dish and baked, covered, for 15 minutes in a 350°F oven, or until heated through for a side dish.

Notes
Traditional mofongo uses a type of freshly fried pork cracklings with meat attached called chicharrones but you can approximate the flavors using a combination of thick-cut bacon and pork rinds. In Puerto Rico, mofongo is made using a wooden mortar and pestle called a pilon, but here I recommend using the pulse button on a food processor, which will allow you to control the texture of the stuffing. Alternatively, you can mash the ingredients by hand using any type of mortar and pestle or even a potato masher.

Make this dish vegetarian or vegan by omitting the pork and using vegetable broth.