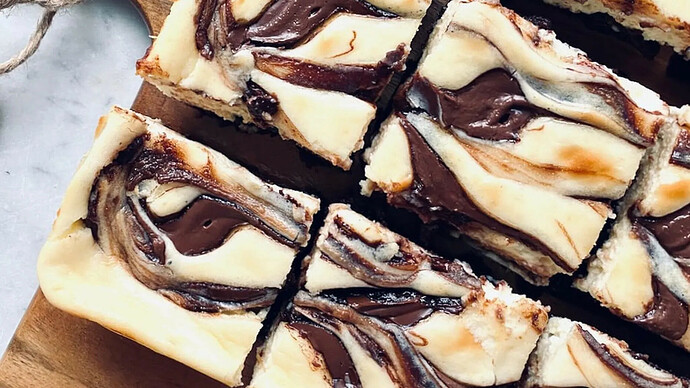 Preheat oven to 350 degrees.
Whisk brownie mix, egg, water and oil in a large bowl. Fold into a 6 x 9 inch oven-safe dish or pan that has been greased with cooking spray.
Bake at 350 degrees for only 15 minutes and remove from oven.

In a separate mixing bowl, add softened cream cheese and beat on high for about 2 minutes until smooth. Scrape the batter down with a spatula and mix again.
Add vanilla, sugar and eggs. Blend well. Repeat process of scraping the batter down and mixing until creamy.
Pour the cheesecake batter over the brownie and spread lightly with a spatula until brownie is covered.
Heat Nutella in the microwave for 30 seconds and stir until creamy. Make 4 stripes on the cheesecake topping about 2 inches apart.
With a butter knife, swirl Nutella into a pattern on top of the cheesecake batter. Try not to penetrate the brownie layer with the knife.
Bake at 350 degrees for at least 25 to 30 minutes until set.
Cool for 30 minutes, then cover with wrap and refrigerate for at least 2 hours.
Cut into 12 squares.