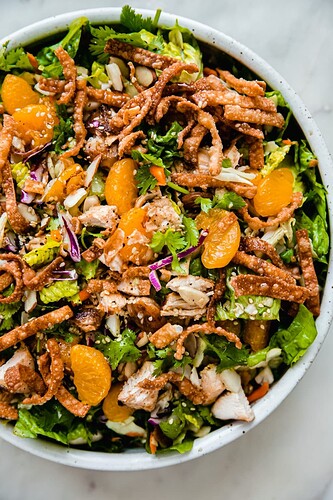 Directions:
Preheat, the oven to 350 degrees F. To prepare wonton strips, cut wonton wrappers into ¼-inch strips. In a deep skillet, pour canola oil to a depth of 2 to 3 inches. Heat Oil to 365 degrees F. Carefully drop wonton slices into hot oil and fry for about 30 seconds, or until crisp and golden. Remove with slotted spoon and drain on paper towel.

Arrange almonds in a single layer on a sheet pan. Toast in the oven for 5 minutes, toss nuts, then toast for an additional 5 minutes, or until golden. Remove from pan to cool.

To make the asian sesame dressing, combine all ingredients except canola oil in a medium mixing bowl with a wire whisk. Once ingredients are combined, slowly pour in the oil while whisking to form an emulsion.

To make the salad, toss the lettuce, cilantro, wonton strips, chicken and dressing in a large mixing bowl until combined. Place the mixture on a serving plate. Sprinkle with sesame seeds and almonds and serve.

whoa i hope this recipe is right and turns out right and tastes right!!!

Thanks! I love this salad!!

Just a warning. My daughter and I did not find this to taste anywhere near the Panera dressing. 3/4 cup of oil made for a very bland dressing. There is also the citrus taste missing. Oh well, would have been nice.