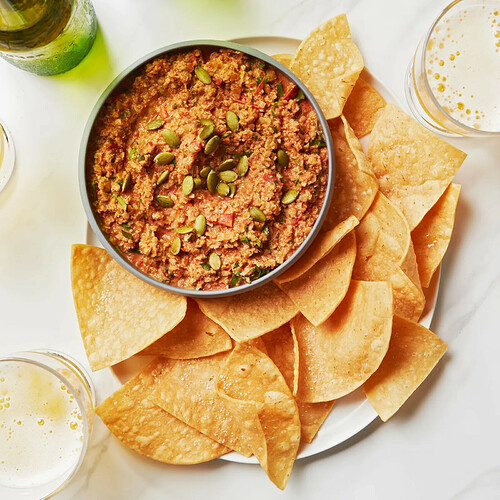 Preheat a comal (griddle or skillet) on medium heat. Spread the pumpkin seeds evenly, in one layer. Toast the seeds, flipping and stirring occasionally with a spatula. The seeds should be golden and crispy. Make sure they don’t burn. Remove from heat and let cool.
In the same comal, roast the tomatoes and chile habanero, still on medium heat until they are charred on the outside and soft to the touch. If the heat is too high, the tomatoes will not cook through. Let cool.
Once cooled, place the toasted pumpkin seeds in the bowl of a molcajete (traditional Mexican volcanic stone mortar and pestle) and grind until very fine. Add the tomatoes and habanero pepper and break them down with the pestle. Once the tomatoes are crushed, using a circular grinding motion continue to work the mixture until smooth and emulsified. This entire step can also be done in a food processor.
Mix in chopped cilantro, chives and salt to taste and serve directly in the molcajete with some crispy tortilla chips.