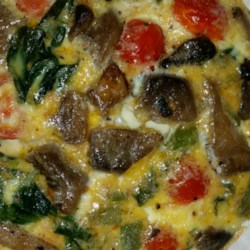 Preheat oven to 350 degrees F (175 degrees C).
Heat butter in a large oven-safe skillet over high heat. Toss spinach in hot butter until wilted, about 30 seconds. Drain spinach well and squeeze it as dry as possible. Transfer to a cutting board and chop.
Beat eggs in a bowl with salt, black pepper, and cayenne pepper until thoroughly combined.
Place bacon in the same skillet used to cook spinach and cook over medium-high heat, stirring occasionally, until bacon has rendered its fat and is almost crisp, 5 to 8 minutes. Use a paper towel held in a tongs to remove excess bacon grease. Reduce heat to medium; saute onion with bacon and a pinch of salt until onion is translucent, about 5 more minutes.
Saute chopped spinach with bacon and onion until spinach is hot; pour in eggs. Use a wooden spoon to distribute spinach evenly throughout the eggs. Sprinkle feta cheese over mixture.
Bake in the preheated oven until eggs are set, 10 to 15 minutes. Top may still be a little wet.
Turn on oven’s broiler. Broil pie until top is lightly golden brown, 2 to 3 minutes.