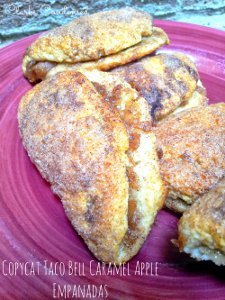 Apples
Peel and core apples, and chop into medium chunks. Place apples, water, brown sugar, and cinnamon into a medium sauce pan, and bring to a boil. Boil for five to ten minutes. Lower heat and let simmer until apples are soft.
Using a potato masher, coarsely mash apples. Set aside.
Crust
Mix Bisquick and coconut milk (or heavy cream) together in a large bowl until it turns into a thick dough. Place on a clean surface and knead for five minutes. Place back in bowl and set aside. It may take a few minutes to get the dough ball to form, but if you are having problems, use your hands to mix.
Caramel Sauce
Combine butter, brown sugar, vanilla and evaporated milk in a sauce pan, and bring to a boil, constantly whisking it. Let boil until sauce reaches desired consistency, whisking the whole time.
Assembly
Immediately after removing caramel sauce from the stove, pour into apple mixture. Mix together and set aside.
Melt butter in a bowl. In another bowl, mix together sugar and cinnamon. Set aside.
Put the dough ball out on clean surface, and using a rolling pin, roll it out to be about 1/4 inch thick. Using a large drinking glass, cut out circles for empanada dough. Remove circles from dough, and re-roll out the remaining dough to get more circles. Repeat until no dough remains.
Taking one dough circle at a time, roll dough out until it is very thin. Holding the dough in your hand, brush one side lightly with butter, and dip that side into cinnamon sugar.
Place a spoonful of caramel apple sauce into the center of the dough. Fold over, and seal shut with a fork by pressing the edges down. It is okay if caramel sauce seeps out a little bit.
Bake at 400 degrees Fahrenheit for 18-20 minutes. Cool for five minutes on cooling rack, and serve warm.