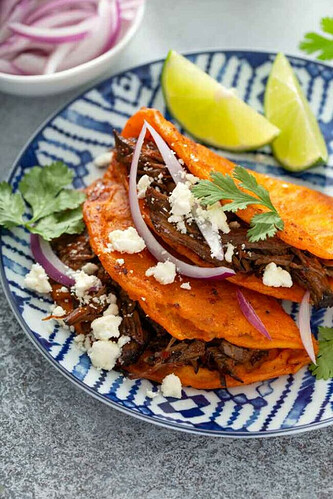 Canola oil or non-stick cooking spray to grease the skillet or griddle?.

Season the meat with salt and ground black pepper and set aside.
Remove the stems and seeds from the dried chiles.
Toast the dried chiles in a dry skillet over medium heat (cast iron works great). Toast them only until hot and fragrant, about 3 minutes. Don’t burn them or they will make the sauce bitter.
Bring 1 cup of water to a boil and remove from the heat. Submerge the chiles into the water and soak for 20 minutes.
Meanwhile, in the same dry skillet roast the onion slices, tomato and garlic cloves. Roast the garlic turning them often until they become fragrant. Remove from the skillet and place them in a blender. Roast the tomato and onion turning them as needed until lightly charred. Remove the onions and tomatoes and place them in the blender.
Place the cinnamon stick in the hot skillet until aromatic, then add to the blender. Add the bay leaves, peppercorn, dried oregano, cumin, marjoram, cloves, vinegar and bouillon to the blender.
Place the softened dried chiles and 1/2 cup of the soaking liquid in the blender. Blend until completely smooth. If you are having a hard time blending the sauce, add more of the soaking liquid.
Turn the Instant pot to SAUTE and heat up the oil. Sear the beef until golden brown on all sides. Do this in batches, if needed, to not overcrowd the pot.
Press cancel to turn the sauté function off. Pour the chile sauce over the beef and add the broth. With a wooden spoon, scrape any browned bits stuck at the bottom and stir to combine.
Close the lid and seal the pot. Cook on high pressure for 55 minutes.
When the pressure cooking is done, allow the pressure to naturally release for 10 to 15 minutes, then turn the valve to venting and release the remaining pressure.
Remove the beef and shred it with the help of two forks. Return the beef to the Instant Pot, toss, and allow the beef to soak up the juices. Season to taste.

Heat a large non-stick electric griddle to 400 degrees Fahrenheit or a medium skillet over medium heat. Using a paper towel dipped in oil lightly grease the griddle or skillet (use kitchen tongs to hold the paper towel). You can also use non-stick cooking spray, if preferred.
Using tongs, carefully dip a tortilla into the birria broth to coat. Place the tortilla on the hot griddle or skillet to warm, about 60 seconds per side. Repeat with as many tortillas as will comfortably fit on the griddle.
Place some of the shredded birria beef on one side of the tortilla. Cook until the bottom is lightly brown and crispy. Gently fold the tortilla in half to make a taco and press gently with a spatula. Remove from the skillet and serve topped with chopped onions, cilantro, and crumbled cheese.