This Secret Recipe will show you how to make a rich and sweet New Orleans dessert. At Commander’s Palace, they take bread pudding to a whole new level with their souffle style bread pudding topped with a sweet and creamy whiskey sauce. Once you taste this dish you will agree; it’s out of this world!

I also have a delicious recipe that is perfect for making a home cooked meal when you don’t have a lot of time to spare. These super easy cordon bleu croissants are made using packaged croissant dough which saves you a ton of time. Grab the recipe here. 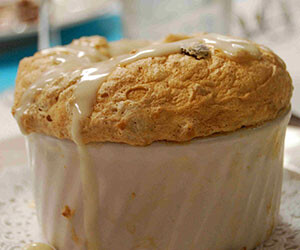 Tip:
New Orleans French bread is very light and tender. If a substitute bread is used that is too dense, it will soak up all the custard and the recipe won’t work.

Get more secret restaurant recipes on our Secret Recipe Forum.

Like Copycat Recipes? Get our Secret Recipes Special 2 for 1 Sale - Cookbooks Here .